In Texas, common law marriage is legally binding. If you decided to informally marry using common law, you may still need to get divorced when you want to part ways. There are a few things you must do for the marriage to be legal in the first place.

Texas Family Code Chapter 2 Subchapter E discusses the legality of a common law marriage. If you signed a declaration of marriage and afterward lived together as husband and wife, your marriage is likely legally binding. Both you and your spouse must be over the age of 18 and not married to anyone else to be legally wed to each other.

The Bureau of Vital Statistics is the place to register your informal marriage through a declaration signed by both spouses. 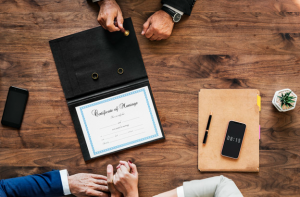 The declaration includes both of your names, date and place of birth, the surname of the wife and social security numbers. The law goes into greater detail on the specifics of how the declaration looks such as including an oath.

If you plan to divorce, the good news is that if you failed to prove the marriage by the second anniversary, you may not officially be wed. Should your spouse stop living with you before that second anniversary, the court may presume you never entered a marriage agreement.

Since the details on when and for how long the common law marriage took place, it is difficult to know for sure whether or not you were married without speaking to an attorney.

This information is only intended to educate and should not be interpreted as legal advice.